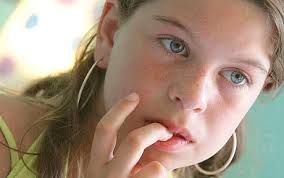 Lots of children and adults have nervous habits. These can be anything from touching the face, nail biting, fidgeting, licking or touching one’s lips, or excessive blinking. As the name suggests they are habits of the central nervous system. It must be understood that a person with such habits has little or no control over them.  They are an automatic response to an unrest at a subconscious level. Kinesiology is a system that seeks to balance stress in the body, using acupressure (acupuncture without the needles). I use a range of tools alongside kinesiology methods to do what can be done to help the child or adult.

I am currently (2016) working with a 12 year old boy who has a number of issues, one of which is Dyslexia. Using an assessment I was able to establish that he has a number of retained primitive reflexes which are affecting him adversely. The Moro reflex is present at a significant level and this means that his whole system regularly goes into ‘fight / flight’ mode. He gets occasional panic attacks which lead to asthma attacks. He gets excessively frightened by the dark and by sudden loud noises. He also has handwriting problems. 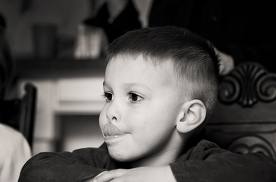 I noted in the initial assessment that he had a habit of licking his lips excessively – to the point where he had developed a significant area of soreness or redness below his bottom lip. I asked him about it and he said it was just something that he always did.

During his first treatment we worked on his retained Moro reflex. When you apply kinesiology techniques to this reflex the aim is to reduce the stress in the central nervous system. The Moro reflex triggers the ‘fight / flight’ response, which is automatic. It is produced by the body in the presence of threat or perceived threat. If it is retained beyond six months of age it means that you are living with a stress in your body. It makes it hard to relax or to be still. His treatment lasted about 40 minutes. He was happy and relaxed and asked me lots of questions throughout – as most kids do.

A week later he came back for his second treatment and the soreness below his bottom lip had gone. His mom confirmed this. I asked him if he felt any differently around the mouth area and he said no. I asked him if he still felt like licking his lips or playing with his mouth and he said that he just didn’t feel like doing it anymore. It just went away.

What does kinesiology do to help with nervous habits?

Interestingly, in his first treatment, I did not set out directly to resolve the nervous habit of licking his lips. The priority on the day was to reduce the effect that the Moro reflex was having on this central nervous system, which appeared to have a knock on affect on the nervous habit. His mom also noticed that he was much calmer generally and happier going to school.

For more information or to book a consultation, please contact me on: